Just when we thought things couldn't get more exciting in the world of S. , we at Osfour's Cage have received an email from an anonymous source with the following pages attached. The file was password protected and after cracking it open we got this: 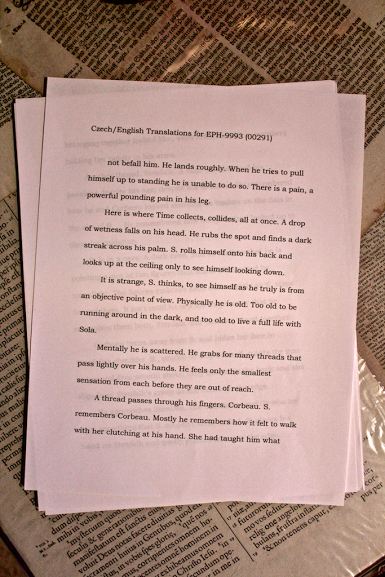 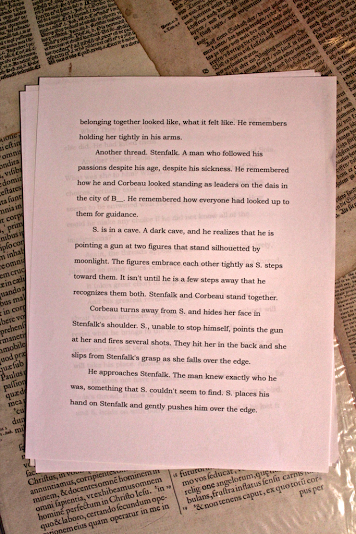 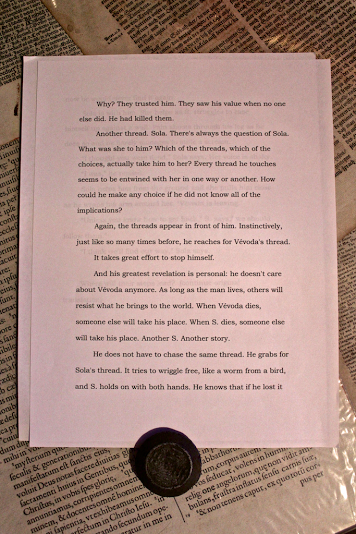 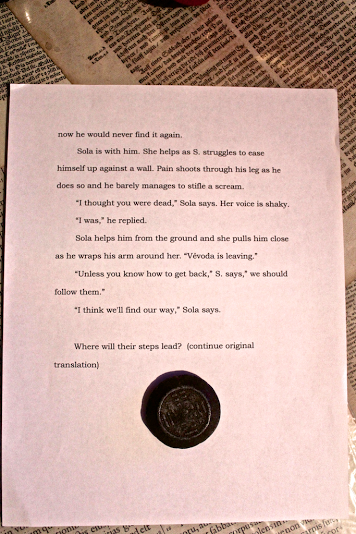 This email was received on Sunday, April 6th at 16:15 GMT. This brings the total of alternate Chapter 10 versions to 4!

Here is the text contained in the above pages:

not befall him. He lands roughly. When he tries to pull himself up to standing he is unable to do so. There is a pain, a powerful pounding pain in his leg.
Here is where Time collects, collides, all at once. A drop of wetness falls on his head. He rubs the spot and finds a dark streak across his palm. S. rolls himself onto his back and looks up at the ceiling only to see himself looking down.
It is strange, S. thinks, to see himself as he truly is from an objective point of view. Physically he is old. Too old to be running around in the dark, and too old to live a full life with Sola.
Mentally he is scattered. He grabs for many threads that pass lightly over his hands. He feels only the smallest sensation from each before they are out of reach.
A thread passes through his fingers. Corbeau. S. remembers Corbeau. Mostly he remembers how it felt to walk with her clutching at his hand. She had taught him what belonging together looked like, what it felt like. He remembers holding her tightly in his arms.
Another thread. Stenfalk. A man who followed his passions despite his age, despite his sickness. He remembered how he and Corbeau looked standing as leaders on the dais in the city of B__. He remembered how everyone had looked up to them for guidance.
S. is in a cave. A dark cave, and he realizes that he is pointing a gun at two figures that stand silhouetted by moonlight. The figures embrace each other tightly as S. steps toward them. It isn't until he is a few steps away that he recognizes them both. Stenfalk and Corbeau stand together.
Corbeau turns away from S. and hides her face in Stenfalk's shoulder. S., unable to stop himself, points the gun at her and fires several shots. They hit her in the back and she slips from Stenfalk's grasp as she falls over the edge.
He approaches Stenfalk. The man knew exactly who he was, something that S. couldn't seem to find. S. places his hand on Stenfalk and gently pushes him over the edge.
Why? They trusted him. They saw his value when no one else did. He had killed them.
Another thread. Sola. There's always the question of Sola. What was she to him? Which of the threads, which of the choices, actually take him to her? Every thread he touches seems to be entwined with her in one way or another. How could he make any choice if he did not know all of the implications?
Again, the threads appear in front of him. Instinctively, just like so many times before, he reaches for Vévoda's thread.
It takes great effort to stop himself.
And his greatest revelation is personal: he doesn't care about Vévoda anymore. As long as the man lives, others will resist what he brings to the world. When Vévoda dies, someone else will take his place. When S. dies, someone else will take his place. Another S. Another story.
He does not have to chase the same thread. He grabs for Sola's thread. It tries to wriggle free, like a worm from a bird, and S. holds on with both hands. He knows that if he lost it now he would never find it again.
Sola is with him. She helps as S. struggles to ease himself up against a wall. Pain shoots through his leg as he does so and he barely manages to stifle a scream.
“I thought you were dead,” Sola says. Her voice is shaky.
“I was,” he replied.
Sola helps him from the ground and she pulls him close as he wraps his arm around her. “Vévoda is leaving.”
“Unless you know how to get back,” S. says,” we should follow them.”
“I think we'll find our way,” Sola says.

Where will their steps lead?  (continue original translation)"