While reading Chapter 6, we come across the name Khatef-Zelh. It's the name of the girl S. has a dialogue with while inside the store house of El-H----. Being a native Arabic speaker, I found the name odd and incomprehensible. Arabic names usually have a meaning and a format. This is a compound name made up of two words: Khatef and Zelh.

Let's start with Khatef  - خاطف. It's easy enough. It can be used as an adjective meaning "fleeting" or "momentary". It can also be used as a noun that means "kidnapper", "snatcher" or "pirate".

Zelh, on the other hand, had me stumped. I thought about it over and over again and couldn't find a suitable transliteration that would work....until now.

The problem is that we have Arabic words being written with Latin letters. There are 28 letters in the Arabic alphabet and 26 in the English alphabet. There is a lot of overlap but there are some letters that are unique to each language.

To transliterate Z you would have to consider many possible matches AND pronunciations. The Arabic letters that "could" be a match are as follows:

This letter is formally pronounced like "th" is in the English word "The", but like Z colloquially.

This letter is similar to the previous one but has a bigger, thicker, sound.

Check this site for audio pronunciations of both if you're curious.All of the above are consonants by the way.

to start the second word we get : ظله which translate to "his shadow". Combining the two words we get  خاطف ظله or "snatcher of his own shadow".

Khatef-Zelh is one of the Arabic names for the Pied Kingfisher!

It is called Khatef-Zelh sometimes because of how it swoops down to the water to snare fish in its long beak, as though it were trying to snatch its own shadow.

One of the unique things about this bird is that it lays its eggs when winter is turning to spring (Feb - Apr) and the seas are calm. This led the ancient Greeks to develop a myth about this bird. Per Wikipedia:


"Modern taxonomy also refers to the winds and sea in naming kingfishers after a classical Greek myth. The first pair of the mythical-bird Halcyon (kingfishers) were created from a marriage of Alcyone and Ceyx. As gods they lived the sacrilege of referring to themselves as Zeus and Hera. They died for this, but the other gods, in an act of compassion, made them into birds and thus restored them to their original seaside habitat. In addition special "Halcyon days" were granted. These are the seven days either side of the winter solstice when storms shall never again occur for them. The Halcyon birds' "days" were for caring for the winter-hatched clutch (or brood), but the phrase "Halcyon days" also refers specifically to an idyllic time in the past, or in general to a peaceful time.
Various kinds of kingfishers and human cultural artifacts are named after the couple, in reference to this metamorphosis myth:

The Arabs, probably inspired by the Greeks, also saw this bird as a good omen and made the association with calm waters. The Arabic / Muslim version of the Kingfisher story appears in some detail in a work by  Zakariya Al-Qazwini, a famous Muslim physician, astronomer, geographer and , yes, science fiction writer. His epic work, "Marvels of Creatures and the Strange Things Existing" (عجائب المخلوقات وغرائب الموجودات), is a famous and beautifully illustrated work of Islamic Cosmography with quite a bit about birds both fictional and real. Here are some illustrations: 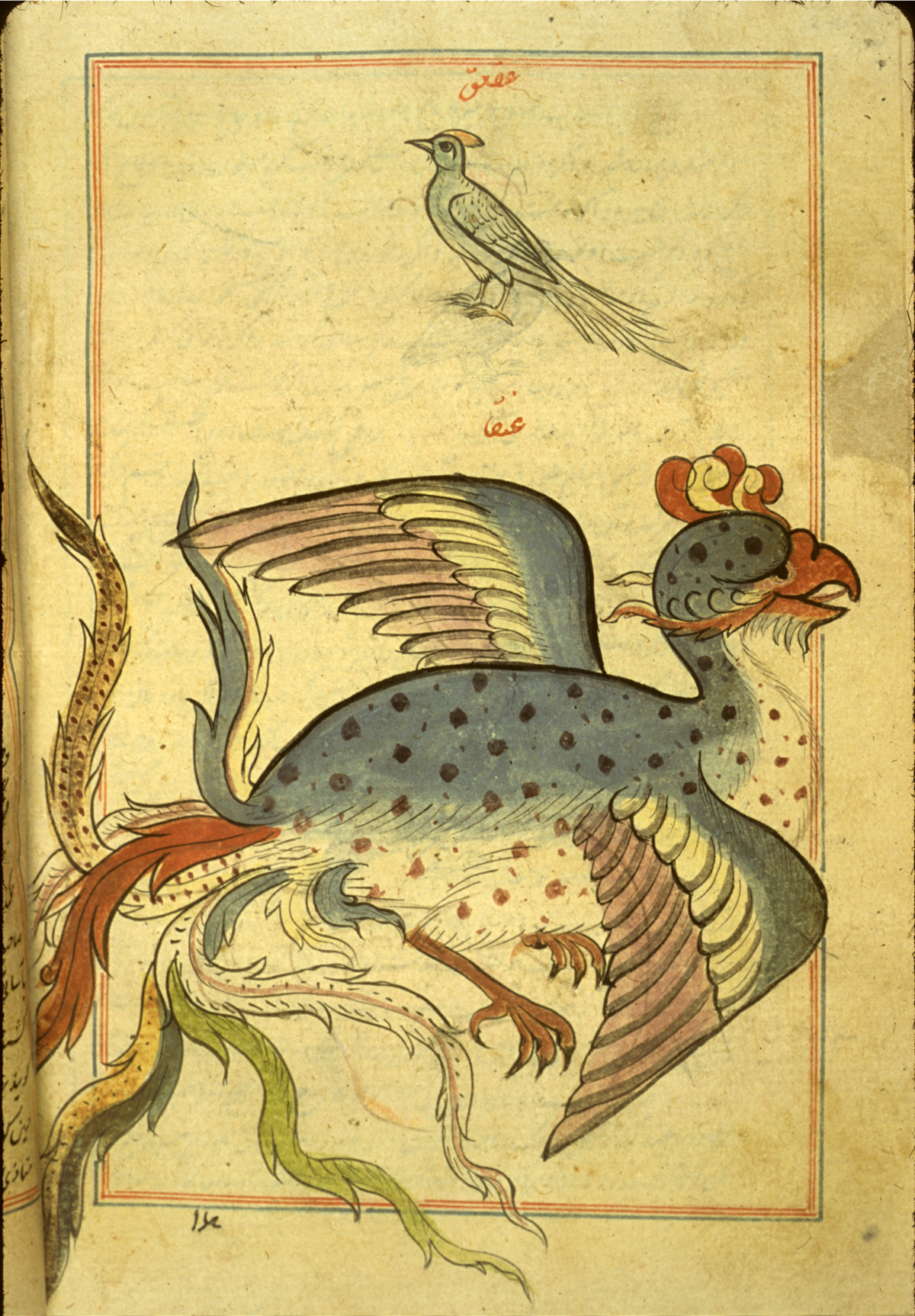 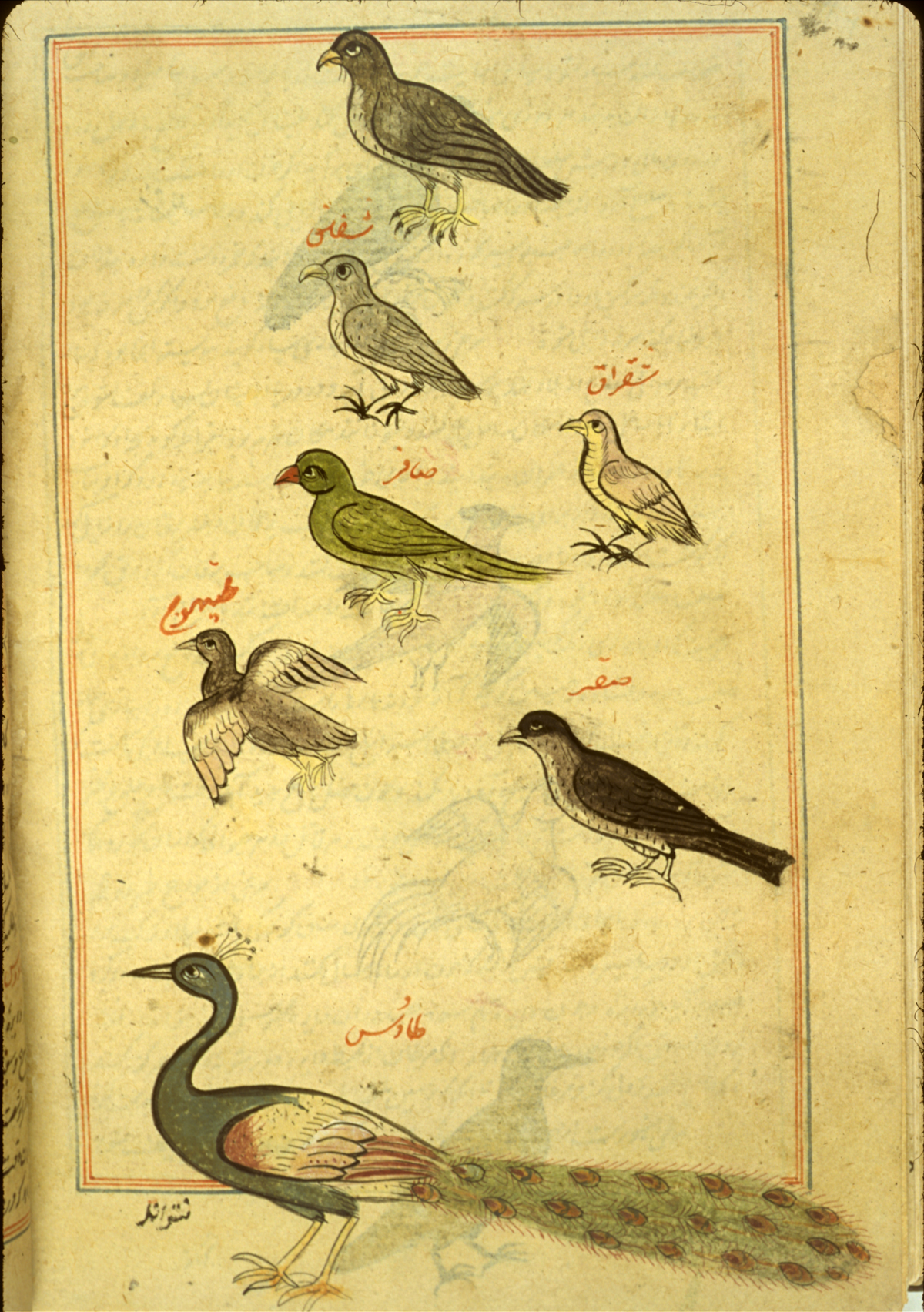 "In this sea there is a bird called cyon (as in Halcyon) who is dear to his parents. This bird, when he grows old and feeble, unable to be himself, two of his chicks carry him on their backs to a place where they will build him a sound nest and provide him with water and sustenance. It is said the Allah himself honored this bird by commanding the seas to be calm for 14 nights after it lays its eggs until they hatch and the chicks come out. Sailors find this bird a good omen and say to themselves when seas calm: The Cyon has laid its eggs."

Doing a quick web search reveals the regions where this bird can be found: 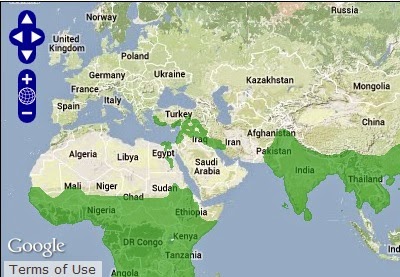 We now have another major clue that I will incorporate into the coming post on where S. is in Chapter 6.